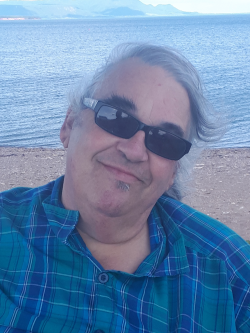 It is with deep sorrow that we mourn the passing of Peter Parker on October 5, 2021, at the Campbellton Regional Hospital, at the age of 61, after many years of battling an illness he faced with outstanding courage. He was the son of late Clarence Parker and late Alice (McGrath) Parker.

He will be dearly missed by his lifelong spouse Isabelle Fillion. He will be lovingly remembered by his brother James (Kathy) living in Ontario, his sister Deborah (Paul) of Moncton and his brother Richard (Debbie) of Richardsville; by his nieces and nephews Justin, Dwayne (Sarah), Sonia, Joshua, Amy-Lynn and Kayla; and by many cousins and relatives from the large Parker/McGrath family. He was predeceased by a sister, Lorraine, and a brother, Daniel.

He will also be lovingly remembered by his in-laws Pierre and Gaétane Fillion of Saguenay, Quebec; by his sisters-in-law Liane, Agathe (Daniel) and Sara; and by Isabelle’s nieces and nephews Gabriel, Jérémie, Alexis, Francis, Stéphanie and Kim (Keven).

Peter had many good friends forming another extended family and who are also profoundly saddened today by his passing. He was a true artist, a formidable singer and musician. We will forever cherish his soft and melodious voice, now heard in heaven. Peter also had a talent for visual arts (painting). We wish to mention his various accomplishments at the local, community and cultural levels, including numerous live musical performances regionally, and the contribution of the theme album The Beautiful Restigouche River (Ma belle, ma douce, ma rivière Restigouche). With his song Mon chemin, he also contributed to a regional flagship record for the Baie Nette fundraising project, to assist with the community efforts against Bennet.

On a personal note, his spouse Isabelle says thank you to the entire staff of the New Brunswick Extra Mural Program in Dalhousie who provided exceptional in-house care over the years, allowing Peter to stay at home for an improved quality of life. A heartfelt thank you also to Dr. Catherine Benoit for her compassion and professionalism all along Peter’s care program. We acknowledge as well the medical personnel on staff at the Campbellton Regional Hospital during Peter’s final short stay for their kindness and quality professional services. Finally, a special and sincere thank you to the people close to us for their support, presence, visits and meals prepared with tender-love-and-care during this difficult ordeal.

There will be no funeral service in accordance with Peter’s wishes. If sanitary restrictions permit, family and friends will meet at his home following his burial on October 19th, 2021 at 1:00 pm, at the cemetery in McLeod’s, N.B. There will be a gathering to celebrate Peter’s life at a further date.

Memorial donations may be made to the Spina Bifida and Hydrocephalus Association of Canada, sbhac.ca