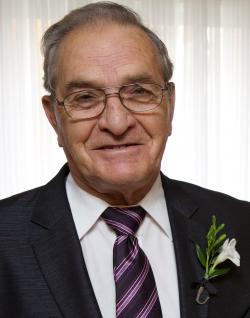 It is with great sadness that we announce the death of Mr. René Audet of Campbellton NB, who passed away peacefully on February 24, 2021. Born in Campbellton NB in ​​1933, he was the son of the late Prime Audet and the late Gertrude Gallant.

One sister, Emillienne, predeceased him.

His first wife predeceased him, the late Cécile (Gallant)

A responsible dad from an early age; widowed at 38 with 6 children at home, he has held the fort and has always made sure that no one misses anything in life. His second marriage will allow him to expand his family with two more children. For him, family was very important; he was the beloved "Pépére" of all his ten grandchildren and never missed a chance to demonstrate the love he had for them. Then with a few years, he was looking forward to having great grandchildren and he was lucky to have nine, whom he loved wholeheartedly.

René, founder of René Trailer Sales in 1973, maintained his company while preserving the essence of a family business, until 2016. From a young age, mechanics and the love of cars have always had a place important in his everyday life. Generous man not only for his family but also for his clients and acquaintances.

He had the turn to welcome people warmly, always ready to offer his house, his car, his trailer ... and so on. Incredible generosity, ready to deprive himself of something to make sure he can help his family before himself.

With his big heart, he never forgot to give roses to the women in his life, whenever we were all gathered together.

Funeral mass will be held in the Notre-Dame-des-Neiges Church, Campbellton, on Friday, July 23rd at 4pm. Respecting Mr. René Audet’s wishes, there will be no visitation at the funeral home.  In memory of Mr. Audet, a contribution to the Tree of Hope Foundation would be appreciated.