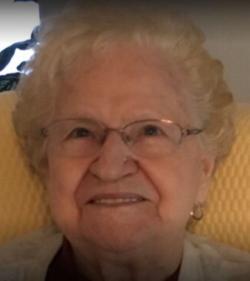 We regret to announce the death of Alice Savoie at the Campbellton Regional Hospital surrounded by her family on Wednesday January 22, 2020 at the age of 94 years and 7 months, wife of the late J. Norbert Savoie.  She was the daughter of the late Cecile (born Ouellette) and the late Dollard Dufour.

As a young girl, Alice, was a teacher in a small school in St-André-de-Restigouche. After her wedding, she accompanied her husband in his business. She was a minister of communion and reader for 30 years, several years as president of the Campbellton school home. She was also a Dame d’Acadie, a mother, a grandmother and a beloved great-grandmother.

The family will receive condolences at the Savoie Funeral Home, located at 47 Alexander Street, Campbellton, this Sunday evening from 7 to 9 p.m. The funeral will be held in the Notre-Dame-des-Neiges church, Campbellton, this Monday at 2:00 p.m.